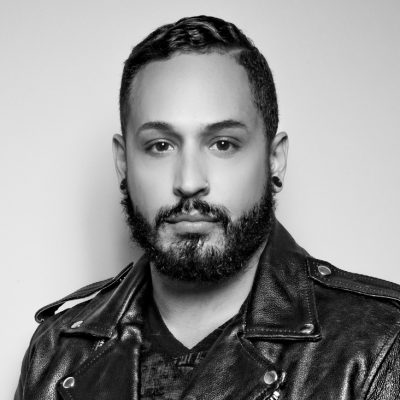 Orlando Santiago is an International Trade and Marketing graduate of the Fashion Institute of Technology (FIT).  He began his career as a freelance makeup artist at Christian Dior, where he advanced to become the regional makeup artist for the Central and Northern region of Florida in just a few years.  He is fluent in Spanish.  In 1999, Orlando was offered a position as a member of the National Art Team for Toni & Guy, where he traveled nationwide doing platform makeup, educating and demonstrating his makeup talent while launching the newly developed Bed Head makeup line.  In 2000, he moved back to New York City to join MAC Cosmetics as a trainer. He managed MAC’s largest account, and was instrumental in introducing new seasonal makeup trends worldwide to the company’s new and existing artists. He also participates in many shows for Fashion Week each season.

Orlando is a renowned specialist in Air Brush work, and has included Special FX to his portfolio of talents. He was the former lead instructor and coordinator for the makeup program for Empire Education Group makeup school in the New York City area for 7 years. He is also a New York State licensed educator, teaching the fundamentals of makeup for Film, Theatre and Television up until the advanced Special FX techniques.  In 2005, Orlando launched his company called the Mantis Design Group. This endeavor featured a makeup accessory tool holder for beauty professionals called the mantis glove, and it was marketed worldwide. Makeup shows stretching from LA to NYC exhibited this adroit tool.

He is taking the industry by storm not only as a makeup artist, but as a young entrepreneur as well.  He is currently expanding his makeup techniques throughout the United States as well as by opening his very own makeup academy in Orlando, Florida in early 2014 named “Orlando Santiago Makeup Academy.  Orlando is a proud member of The Powder Group, an internationally recognized team of makeup educators for his professional technique in advanced airbrushing for beauty makeup and has spoken and presented in 7 international countries including Germany, Australia, Brazil, Iceland, England, Russia and Spain and national shows including The Makeup Show New York, Chicago, Miami, Los Angeles, Orlando and Dallas. He is currently working as the National Artistry Executive for Guerlain and is represented by The Montgomery Group in New York.