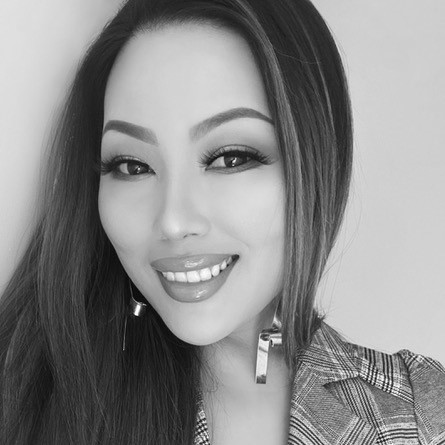 Mimi is a Vancouver-based professional makeup artist renowned for her unique artistic style. Since graduating from Blanche Macdonald Centre in 2014, her pioneering illusionary work has garnered international attention and a large following on social media (@mimles). Mimi was born in Macau – a former Portuguese colony on the southeast coast of China known for its distinct European and Chinese influences. She immigrated to Canada with her parents in the mid 90’s where she now practices and teaches her craft.

Like her birthplace, Mimi’s inspiration stems from various sources. This includes patterns and textures from her surroundings, photoshopped digital art, and surreal paintings from artists such as Salvador Dali and M.C. Escher. In addition, Mimi suffers from sleep paralysis – a condition in which her mind is conscious, but her body becomes temporarily unresponsive while waking. During these bouts, she experiences vivid and often frightening visions which have inspired many of her more morbid and distorted face looks. She avoids viewing the works of other makeup artists however, as she believes that doing so will stunt her creativity. Instead, Mimi prefers to use her past works as a benchmark of her progress and maturity as an artist.

Coupled with her background and previous career as an educator, Mimi now instructs at Blanche Macdonald and leads various masterclasses and workshops around the globe where she demonstrates her iconic looks. She also freelances as the artistic director for various campaigns and her CV includes collaborations with brands such as Make Up For Ever, MAC, Kryolan, Mehron, UNICEF, Warner Brothers and Samsung to name a few. Since making a name for herself in the makeup community, Mimi’s work has exploded into the pop culture scene as she has been featured on various international television shows, magazines, music videos, and most notably at the 2019 Met Gala where she created the event’s most talked about look on actor/model Ezra Miller.