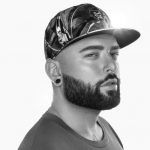 Jordan Liberty is an LA-based makeup artist, photographer and creative director. His iconic beauty and campaign work (Maybelline, Urban Decay, NYX, Anastasia Beverly Hills, Benefit, Sephora) has made him a sought-after name within the industry. Liberty and his work have recently been featured in Allure, Glamour, LADYGUNN, Xiox, Laud and W Magazine. In 2015 he received a coveted “Best of Beauty” award from Allure magazine, and was named “Artist of the Year” in 2017 by The Makeup Show.