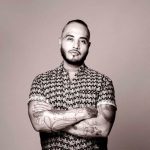 Nothing is more inspiring for Jonathan Lule than a confident woman that is aware of her facial features like the super models and divas from the 90’s, his biggest inspirations come from: Madonna, Cindy Crawford y Gia Carangi.

His style, in his own words is defined by his favorite features: a strong brow, radiant skin and a nude lip. Born in Mexico city on 1979, at a very early age he realize his fascination for art and crafts and because of this he decided to enroll in Fashion Design school where he got his Masters inn Image Design in Madrid.

Along exploring his career he discovers makeup which quickly became his hobby and subsequently a career, working on important projects in editorial, advertising and show business. Because of his spontaneous and irreverent personality, his 17 plus year of experience talent and vision has taken him to work all over the globe on what he now calls his true passion Makeup.

Jonathan believes the sky is the limit and by this implying a promise of constant evolution and always looking for ways to push his talent.