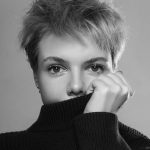 Darya Kholodnykh has first started her artistic career in 2004 and she has been doing
workshops and classes in different cities and countries since 2009. In 2011 she developed
her own courses and started teaching signature programs.

In 2015 she inspired and became a creative leader of the Chilly Dash Team that has
become a base for a local makeup school with a specific approach to teaching makeup –
they help reveal one’s skills and think hard rather than stamp popular looks.
Darya is also the author of the concept “a makeup artist is a makeup artist’s best friend,
there’s no competition” which is growing more and more popular every day in Russian
speaking community of make-up artist worldwide.

Darya is highly valuable and desirable master on any professional set as much as she is a popular inspirer and mentor for experienced artist from all over the globe. She has the credit for ideas and implementations of a variety of project addressing the creative society: #creative_shake performances, #universeinyourhand post cards, #second_beauty fairs и #photo_day shoots that have a meaning.

Darya teaches in numerous classes for makeup artist in Russia and Europe and often performs at professional events. She has taken part in the Make Up For Ever Pro Makeup Seminar, Beauty Fair Brazil, Makeup Up Days, etc. In 2017 she began teaching at the British Higher School of Art and Design. She had represented Russia at the global Trend Vision MAC 2016. Just recently she has been assisting Kabuki at a shoot and later at the Moschino show in Rome. And her works can be seen in print in Russia and other countries all the time.